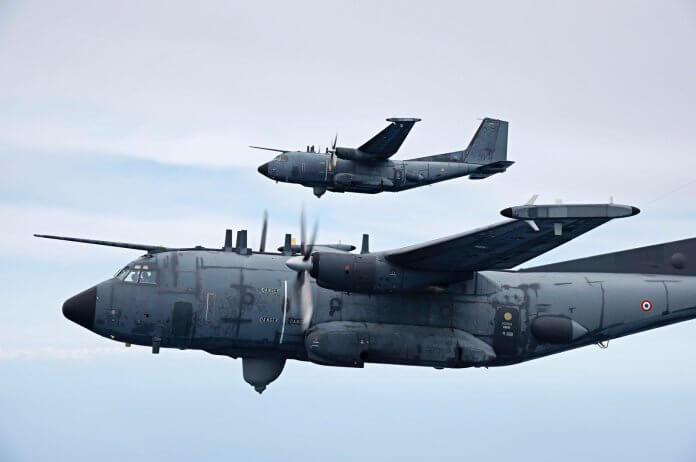 The French Air and Space Force will retire its two C-160G SIGINT planes next year. Will this cause a shortfall in strategic/operational SIGINT collection?

ELINT is collected by the aircraft’s Thales ASTAC (Analyseur de Signaux Tactiques/Tactical Signals Analyser). This is located inside the aircraft in electronic bays. Accompanying interferometry antennas are mounted in two pods on the aircrafts’ wingtips. These detect and locate ground radar emissions, most probably across wavebands of at least two gigahertz/GHz up to 18GHz, possibly extending to 40GHz. Several antennas on the dorsal fuselage may transmit raw or analysed ELINT across very/ultra-high frequency datalinks.

The retirement of the C-160G next year risks a capability gap for the ADAE. The air force is acquiring a fleet of three new Dassault Falcon-8X Archange SIGINT aircraft. The first is expected to enter service in 2023 risking a twelve-month gap sans the C-160G’s capabilities. This assumes that the first of Falcon-8X enters service on time.

Trivia buffs might be interested to know that Gabriel is an acronym. It stands for Groupement Aérien de Brouillage, Recherche et Identification Electronique. This translates as Jamming, Research and Electronic Identification Air Group. Archange is an acronym for Avion de Renseignement à Charge de Nouvelle Genération. This translates as New Generation Intelligence Aircraft. In Abrahamic faiths, Gabriel is an archangel, and the patron saint of those working in broadcasting and communications.

How might the air and space force address this gap? Armada approached the ADAE who declined to comment. Pierre-Alain Antoine, an electronic warfare expert, told Armada that the force has several options. He cited ASTAC pods equipping the ADAE’s Dassault Mirage-2000D combat aircraft. These have similar in capabilities to the Gabriels’ ASTAC system. They could be supplemented by ELINT captured with the Thales Spectra self-protection systems of the ADAE’s Rafale-F3B/C combat aircraft. One disadvantage of both the Mirage-2000D and Rafale-F3B/C is that neither can accommodate SIGINT experts to analyse signals in real time in situ.

Another option is to use the Breguet/Dassault Atlantique ATL-2 maritime patrol aircraft of the Aeronavale (French Naval Aviation). These are outfitted with an Electronic Support Measure (ESM) optimised for supporting naval operations. The ADAE’s four Boeing E-3F Sentry airborne early warning aircraft are also equipped with ESMs.

Intelligence sharing is another option. Brexit and the recent AUKUS pact involving Australia, the UK and United States have battered Anglo-French relations. That said, the 2010 Lancaster House treaty between the UK and France has provisions for intelligence sharing. It may be possible for the Royal Air Force to share raw ELINT collected by its Boeing RC-135W Airseeker R.1 SIGINT planes. French SIGINT analysts could then interpret this data and configure it for French military aircraft threat libraries.

Moreover, France possesses four ELISA (ELINT by Satellite) spacecraft most probably collecting raw ELINT. France’s is also getting new CERES SIGINT satellites. The first of these could be launched in November 2021 according to Armada sources. The CERES constellation could also help raw ELINT collection. Yet this would be a temporary solution at best. Both ELISA and CERES are thought to be tasked with collecting civilian and military SIGINT. The asset of using an aircraft like the C-160G is that ELINT can be immediately analysed in situ by SIGINT experts familiar with the area.

At best, the ADAE will be able to make good the C-160G’s shortfall with these other capabilities. However, complex undertakings like the Archange programme can suffer delays. In the worst case scenario the air force will have to wait longer than planned for the new aircraft. Should that happen, these stopgap capabilities may have to be teased out for a little longer than originally anticipated.