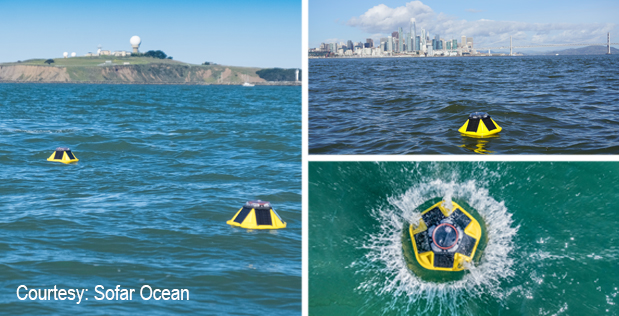 Throwing a bottle into the sea and wondering where it will end up as a thought that has entered most children’s imagination while standing by the seashore.

The US Defense Advanced Research Projects Agency (DARPA) has taken this thought a lot further through its Forecasting Floats in Turbulence (FFT) challenge, which aimed to improve the understanding of the turbulent convergence of wind, waves, and currents on the surface of the ocean – and particularly objects that float on it. It is part of the organisation’s Ocean of Things programme.

According to DARPA, “The goal of the challenge was to spur development of algorithms to better predict where free-drifting floats will travel over time.”

The competition was entered by 32 teams and was won by a team called Second Sight Predictions with 498 points (who won a prize of $25,000 in the process).

Second Sight Predictions was in fact only one person, Chris Wasson who is a guidance, navigation, and control engineer working on satellite development in southern California.

The challenge for those taking part was to develop algorithms or other methods to predict where 90 Sofar Spotter drifters – about the size of a basketball – floating freely in the Atlantic would travel over a 10-day period. Each team received the previous 20 days of location data from the drifters’ GPS coordinates. Using that data, teams attempted to predict where the spotters would travel a week and a half into the future.

A DARPA explained the points system: “Points were awarded based on prediction accuracy of drifters’ location in 2-day, 4-day, 6-day, 8-day, and 10-day forecasts. The further out the forecast, the higher the point value for accuracy. For example, a two-day forecast within 16km of the actual float position was worth one point, but a 10-day forecast within 16km was worth 20 points for added difficulty. Lastly, to ensure competitors had strong trajectory models, they would no longer receive points for any drifter prediction that experienced greater than 32km of error for any forecast. So, if a forecast for a particular float was off by 50km on Day 6, but within 1km on Days 8 and 10, they would receive no points for that float because the trajectory was too far off.”

Winner Wesson said of the challenge that “the focus was split equally on algorithms and their application to an engineering problem…..There are still many examples in the challenge float data where the float trajectory disagrees strongly with all available ocean current and wind data at that latitude/longitude. I think this is a strong indication that one of the biggest remaining hurdles in this problem is not in modeling surface effects but in identifying errors in these models, particularly ocean surface current models.”