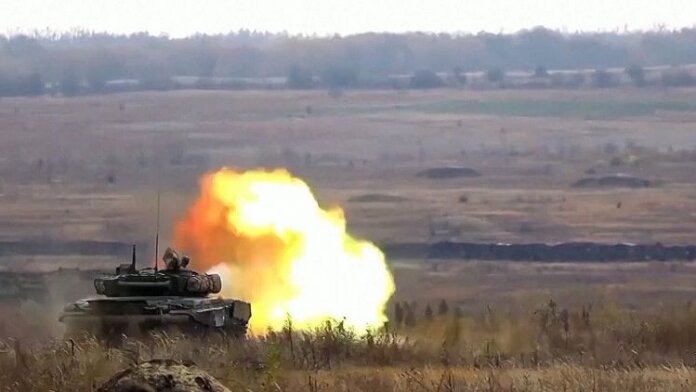 I restart Bunker Briefing again in 2022 much where I left off in November 2021, shaking my head at the madness of the Russian leadership.

While President Putin, on the surface, complains that NATO is encroaching eastward towards Russia and that Russian security is threatened, the reason why so many ex-Soviet Bloc countries want to join NATO is conveniently forgotten.

The years that many of those countries spent, post World War Two, under the draconian occupation of Soviet forces with puppet governments installed has left them with a resolute commitment never to return to such dark days of Russian oppression. Events such as the Hungarian Uprising of 1956 and the Prague Spring of 1968 underline the difference between free and democratic societies of the West and those held down and their populations subservient to the will of the Kremlin.

The complete charade of Russia’s claim that its armed forces are – en masse – just surrounding the Ukraine for the purpose of military exercises holds little credibility. The huge numbers of troops with the complete set of supporting arms threatens, as many commentators have said, the biggest military conflict on mainland Europe since the Second World War. Perhaps the most unbelievable aspect to this will that it will pitch two nations together that have close historic links and family ties.

One certain result will be the rapid re-armament of European NATO states facing Russia, a massive rejuvenation and strengthening in the resolve of the organisation in general,  and a resulting return to Cold War styled bases, deployments and readiness. Economically the fall out will effect the global economy at a time when it is still suffering from the impact of COVID.

Let us hope all of the above does not happen.

THOUGHT FOR THE WEEK

During the International Military Helicopter conference, staged over three days from 15-17 February, in London, UK and managed by DefenceIQ, the theme of the future of military rotorcraft was at the fore. The conference was well attended by a good international audience and backed by a good range of industry sponsors.

Prior to the conference, on Monday 14 February, UK Minister of the Armed Forces James Heappey and US Secretary of the Army Ryan McCarthy signed a Memorandum of Agreement (MoU) to collaborate on the modernisation of a number of Army capabilities, not least the US Army’s next generation rotorcraft covered by the Future Vertical Lift development.

The FVL Co-operative Program Feasibility Assessment agreement is more of a ‘hanging onto the coat-tails’ of two programmes that have long been in motion to produce the US Army’s next generation of Future Long-Range Assault Aircraft (FLRAA) and the Future Attack Reconnaissance Aircraft (FARA). The underlining requirements are for speed, range and open system architecture so that through-life systems upgrades are not proprietary and that the cost of ownership should be reduced over time.

The UK is also a member of the the NATO Next Generation Rotorcraft Capability (NGRC). In November 2020 the UK four other NATO member nations – France, Germany, Greece and Italy – in signing a Letter of Intent (LoI) to develop a new helicopter capability.

Incidentally, the UK also needs a New Medium Helicopter (NMH) to replace its fleet of 24 AS 330 Puma HC2s, upgraded and delivered by Airbus Helicopter from 2012 to 2015. Upgrades included two Turbomeca Makila 1A1 turboshaft engines and a new digital cockpit among other improvements. However, the fleet is due for retirement in 2025, with replacements also being sought for six AS365 Dauphan IIs, the three Bell 412 Griffin HAR2 helicopters operated in Cyprus, five Bell 212s operated in Brunei and Kenya, as well as filling a light attack helicopter role now vacant following the retirement of the Lynx AH Mk9. There are already a number of potential contenders for the NMH including the Leonardo AW149, Airbus H160M or H175M, Sikorsky’s S-70I or even the Bell 525 Relentless. But this is not a replacement for a next generation helicopter requirement, be it of the FVL or NGRC type.

One comment made during a coffee break to this writer by a serving European officer was along the lines of – “why is so much being made of the US FVL strategy – the US may have to fly ‘far and fast’ if it operates in the Indo Pacific, but that rule does not have to apply to Europe.” However, with the ever present demands from military pilots for more speed, range and power – it is unlikely that next generation designs will be overlooked.

10 February – Indonesia, F-15ID Aircraft
The State Department has approved a possible Foreign Military Sale to the Government of Indonesia of F-15ID Aircraft and related equipment for an estimated cost of $13.9 billion.

3 February – Jordan, F-16 C/D Block 70 Aircraft
The State Department has made a determination approving a possible Foreign Military Sale to the Government of Jordan of F-16 C/D Block 70 Aircraft and related equipment for an estimated cost of $4.21 billion. The Defense Security Cooperation Agency delivered the required certification notifying Congress of this possible sale today.

Highlighting a selection of major equipment and support contracts and Foreign Military Sales between 13-18 February 2022. This list is the Editor’s selection and is arbitrary.

18 February
US Army
Boeing was awarded a $103 million modification contract for AH-6 aircraft for Thailand. Fiscal 2010 Foreign Military Sales (Thailand) funds in the amount of $103 million were obligated at the time of the award. US Army Contracting Command is the contracting activity.

US Navy
Lockheed Martin Aeronautics is awarded a $42 million modification IDIQ contract that exercises an option to procure ancillary mission equipment in support of F-35 Joint Strike Fighter Lot 16 production aircraft for the Navy, Marine Corps, Air Force, Foreign Military Sales customers, and non-U.S. Department of Defense participants. Work will be performed in Fort Worth, Texas, and is expected to be completed in December 2024. No funds are being obligated at time of award; funds will be obligated on individual orders as they are issued. The Naval Air Systems Command, Patuxent River, Maryland, is the contracting activity.

Huntington Ingalls Industries was awarded an $188 million modification contract to continue performance of the repair, maintenance, upgrades, and modernisation efforts on the USS Columbus (SSN 762) engineered overhaul. The Supervisor of Shipbuilding, Conversion and Repair, USN, is the contracting activity. (Awarded Feb. 16, 2022)

15 February
US Navy
Sikorsky Aircraft is awarded a $372 million modification contract that exercises an option for the production and delivery of four low-rate initial production, Lot 6, CH-53K Heavy Lift aircraft, as well as associated aircraft programmatic and logistical support for the government of Israel. It is expected to be completed in November 2025. Foreign Military Sales funds in the amount of $372 million will be obligated at time of award. The Naval Air Systems Command is the contracting activity.

US Army
Northrop Grumman Systems was awarded a $61 million modification contract for procurement of M1156 Precision Guidance Kits. US Army Corps of Engineers is the contracting activity.

14 February
US Army
Lockheed Martin was awarded a $16 million contract for Patriot Advanced Capability-3 flight test support. Work will be performed in Saudi Arabia and Qatar, with an estimated completion date of 13 February, 2025. Fiscal 2022 Foreign Military Sales (Saudi Arabia and Qatar) funds in the amount of $16 million were obligated at the time of the award. US Army Contracting Command is the contracting activity.

Textron Aviation was awarded an $11 million contract for new commercial Beechcraft King Air 360ER aircraft. Fiscal 2022 Foreign Military Sales (Sri Lanka) funds in the amount of $11 million were obligated at the time of the award. US Army Contracting Command is the contracting activity.

US Navy
Northrop Grumman Military Aircraft Systems is awarded a $22 million modification contract that adds scope to provide non-recurring engineering risk reduction to support the delivery schedule for E-2D aircraft FAA1-FAA3 for the government of France. Work is expected to be completed in April 2022.  Foreign Military Sales funds in the amount of $22 million will be obligated at the time of award. The Naval Air Systems Command is the contracting activity.

Keeping an Eye on the Battle