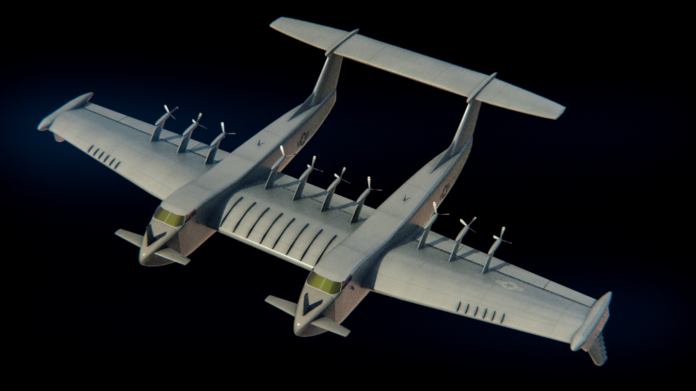 In May, the US Defense Advanced Research Projects Agency (DARPA) launched its Liberty Lifter project. This is intended to demonstrate that a low-cost X-plane flying over the sea, but within ground effect, could be used to deliver seaborne strategic and tactical lift.

It would take-off and land on water and could transport heavy loads quickly across maritime areas flying at up to 20 metres above the water surface, although and would also be expected to sustain mid-altitude flight up to 10,000 feet. Flying within ground effect of the ocean allows a significant increase in range and cargo payload.

It would be independent of fixed-airfields, long runways and ports, being able to land cargo ‘over the beach’ by landing close to the shoreline.

“This first phase of the Liberty Lifter program will define the unique seaplane’s range, payloads, and other parameters,” said Alexander Walan, a programme manager in DARPA’s Tactical Technology Office.

Experimenting with aircraft flying with “wing in ground effect” is not new. During the Soviet Union era, Russia designed and built the Lun-class ekranoplan (Project 903), nicknamed the ‘Caspian Sea Monster’. However, with short wings it could not fly in rough sea conditions as it had to stay at around 10 feet (3m) above the water. Carrying up to 100 tones, it had a speed of 297 knots (550 km/h) and a range of 1,000 nautical miles (1,900 km). Only one aircraft entered full service flying for around 10 years from 1987.

DARPA has set out its three initial design study areas for the Liberty Lifter programme:

Extended Maritime Operations: Emphasis will be placed on operating in turbulent sea states by creating high-lift abilities at low speeds to reduce wave impact load during takeoff/landing, and innovative design solutions to absorb wave forces. In addition, the project will address risks of vehicle collision during high-speed operation in congested environments. Finally, the aim is for the vehicle to operate at sea for weeks at a time without land-based maintenance activities.

Full-Scale Affordable Production: Construction will prioritise low-cost, easy-to-fabricate designs over exquisite, low-weight concepts. Materials should be more affordable than those in traditional aircraft manufacturing and available to be purchased in large quantities.

Complex Flight and Sea Surface Controls: Advanced sensors and control schemes will be developed to avoid large waves and to handle aero/hydro-dynamic interactions during takeoff/landing.