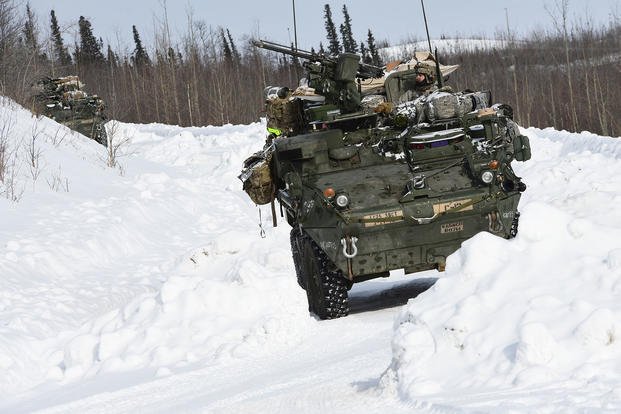 The US Army Forces in the Pacific are without one of its strategically deployable armoured ground combat brigades as the last Stryker armoured wheeled combat vehicles depart Alaska for Anniston Army Depot Alabama in the continental United States.

The 320 Strykers equipped the 1st Stryker Brigade Combat Team (SBCT), 25th Infantry Division stationed at Fort Wainwright, Alaska. The SBCT, according to Army documents, was introduced to fill the operational gap between light forces and heavy armoured forces. It provided a strategically transportable combined arms force that could be deployed rapidly to meet distant operational demands yet have high ground manoeuvrability of heavy armour.

The SBCTs, including those from Wainwright, have demonstrated this capability repeatedly since their formation. The 1st/25th SBCT was organised in December 2006 following the deactivation of the 172d Infantry Brigade also equipped with Stryker since October 2003.

The Stryker has been operating in Alaska for 19 years as both a contributor to meet deployment contingencies of the Pacific Theater and as a potential combat element for operations within Alaska itself.

With the designation of the Wainwright brigade to light infantry, US Pacific Forces lose the armoured manoeuvre capability that could be potentially employed in support of operations anywhere in the Pacific theater provided by the Stryker’s. The return to light infantry may reflect increased emphasis on the need for forces capable of operating in the Arctic environment. The Army recent contract with BAE Systems for a new Cold Weather All-Terrain Vehicle (CATV) reinforces this possibility.