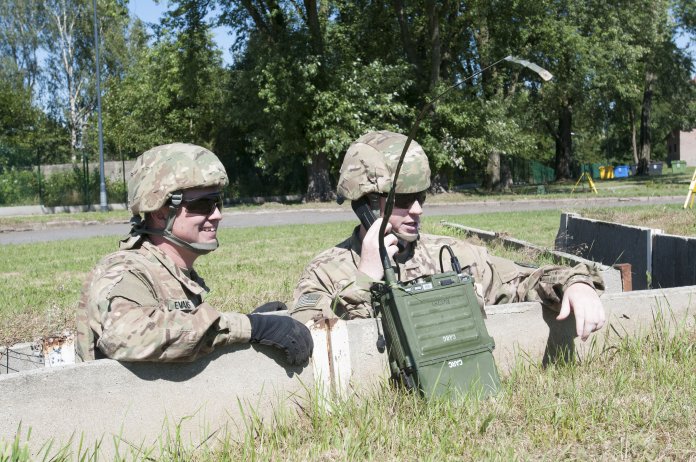 Persistent Systems announced in early August that it received orders from QinetiQ for its Wave Relay networking devices. These will equip the Common Robotic System – Individual (CRSI) apparatus QinetiQ is supplying to the US Army. The CRSI provides dismounted soldiers with an uninhabited ground vehicle supporting intelligence, surveillance and reconnaissance missions. Wave Relay provides a radio link between the CRSI and its operator. QinetiQ is providing its SPUR system to satisfy the US Army’s CRSI requirement. Persistent Systems’ press release stated that this latest order covers the supply of “thousands” of Wave Relay systems.

Hanwha Systems revealed it is developing a tactical communications system which will use fifth-generation wireless protocols and the OneWeb Satellite Communications (SATCOM) system, Janes reported in late July. The company’s architecture will include a SATCOM antenna and terminal. The latter uses a smartphone-style architecture known as the Integrated Versatile Terminal (IVT). The company said the IVT can connect with several modules including tactical radios along with SATCOM and 5G systems. Future plans call for these modules to eventually be embedded within the IVT.

Lockheed Martin will launch three satellites in 2023 to help demonstrate the United States’ Joint All-Domain Command and Control (JADC2) concept of operations, satellitetoday.com reported on 5th August. Of the three satellites, two will be configured for tactical intelligence, surveillance and reconnaissance collection. The third will be used for communications. The company said the three spacecraft, which use its Pony Express-2 cubesat bus, will support orbital demonstrations and experiments pertinent to JADOC. More details regarding JADC2 can be found here.

Indian media reports on 5th August announced that the country’s army was looking at potential applications for quantum technologies. The force is reportedly interested in quantum communications. It is liaising with academia and industry on the benefits of quantum technology for military communications. The technology has garnered interest in recent years, particularly concerning how it may strengthen encryption. Specifically, quantum key distribution which immediately determines if someone has attempted to interfere with a transmission, shows promise.

In other news, on 5th August reports revealed the Indian Army had concluded an exercise to test the operational readiness of its space assets. The exercise, which took place in late July and was codenamed Skylight, included several indigenous satellites. Tests were performed of static, mobile and backpack satellite communications terminals. The exercise occurred alongside an army study of the cyber and electronic warfare dimensions of the ongoing Ukraine conflict. The report added that the force is taking a close interest in the lessons learned regarding military communications. Although the army does not currently possess its own communications satellite, this is expected to change by December 2025. That is when the force is schedule to receive its own GSAT-7B spacecraft built by the Indian Space Research Organisation.

In early August, Defense News reported that the US Department of Defence’s (DOD) Information Systems Agency had extended a contract with Booz Allen Hamilton. The contract extends the provision of the company’s Thunderdome prototype cybersecurity architecture. This helps protect the DOD’s Secure Internet Protocol Router Network (SIPRNET). SIPRNET provides the DOD the wherewithal to securely move classified information around the world. Booz Allen Hamilton was awarded a contract worth $6.8 million in January to develop Thunderdome as a prototype. The contract extension stretches the pilot scheme to apply Thunderdome to SIPRNET until early 2023. The report continued that the contract extension resulted from lessons learned regarding Russia’s invasion of Ukraine in February. These lessons learned included the effects of Russian cyberattacks on Ukrainian targets.

Reports from breakingdefense.com in early August warned of potential cuts to the US Army’s Capability Set-23 (CS-23) communications modernisation initiative. The army is rolling out improvements to its networking every two years via a series of capability sets. CS-21 is currently being implemented. As Armada reported in August CS-23 has been through a series of tests evaluating the architecture. The report stated that CS-23 could be affected by cuts proposed by the Senate Appropriations Committee. The committee has earmarked reductions of $59.9 million for the procurement of radios supporting the army’s Integrated Tactical Network (ITN). ITN is being rolled out through these respective capability sets. Other cuts include a reduction of $19.8 million for the procurement of the army’s Combat Net Radio.

Ovzon has had its contract to provide SATCOM services to the United Kingdom’s Ministry of Defence (MOD) renewed, according to a satnews.com report on 3rd August.  The contract renewal will run for 18 months, commencing on 1st September and is worth $1.1 million. Ovzon is planning to launch its first communications satellite, Ovzon-3, by the end of 2022. This will help the company provide SATCOM services not only to the UK MOD but also to North Atlantic Treaty Organisation (NATO) members.