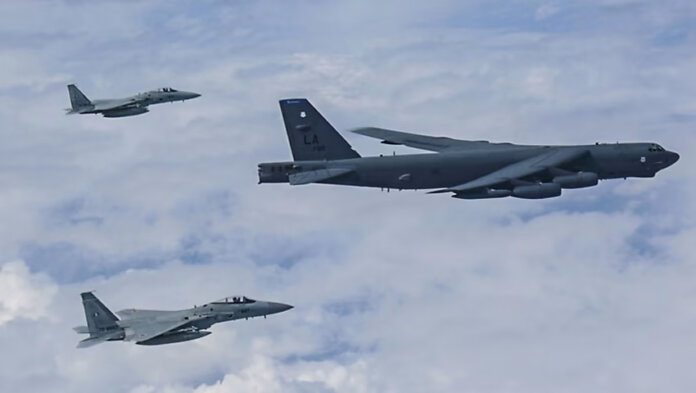 Unpacking the motivations and benefits of basing USAF B-52s in RAAF Base Tindal.

In late October, it was revealed that the United States will build dedicated facilities in the Northern Territory, including a “squadron operations facility” and parking areas for the aircraft.

The upgrades to Tindal that will allow it to house the B-52s are expected to cost $22.5 million and be financed by the US government.

The US Air Force appeared to confirm the plans telling the ABC, “The RAAF’s ability to host USAF bombers, as well as train alongside them, demonstrates how integrated our two air forces are.”

The B-52H Stratofortress is a long-range, heavy bomber that can perform a variety of missions, including nuclear and conventional bombing alongside maritime surveillance.

The US currently has a fleet of 76, and the aircraft type has been in operation for more than 60 years. During the first Gulf War, it dropped 40 per cent of the coalition force’s weapons.

It has an unrefuelled combat range in excess of 14,000 kilometres.

The announcement was met with ire from China.

The country’s Foreign Ministry spokesperson, Zhao Lijian, urged the US and Australia to abandon what it branded an “outdated Cold War zero-sum mentality” and “narrow geopolitical mindset”.

“Such a move by the US and Australia escalates regional tensions, gravely undermines regional peace and stability, and may trigger an arms race in the region,” Lijian said.

He added the countries should “do more things that are good for regional peace and stability and mutual trust among all parties”.

Writing for The Interpreter earlier in the month, Sam Roggeveen unpacked the announcement analysing the motivations and risks of the plan.

To the security expert, the announcement signals a pivot from “training to operations”.

“The clear intent is that American B-52s (or the more modern and lethal B-2 bomber) will fly combat missions from RAAF Tindal in the event of war with China,” Roggeveen wrote.

However in the event of conventional conflict, the aircraft is likely to have limited benefits.

“China has one of the densest and most sophisticated air defence networks in the world, so there is no question of the B-52s entering Chinese airspace in wartime, because they would be easy targets,” he continued.

“So, if the aim is to reinforce American deterrence against China, then when viewed in isolation, the RAAF Tindal upgrade is no more than a modest response.”

So why base B-52s at Tindal? The expert suggests that basing the capabilities in Australia is safer for the assets that in alternative US bases.

“The reason the United States and Australia are taking this step is that the US Air Force base in Guam, where the B-52s and B-2s regularly deploy, is now too vulnerable to Chinese missiles, and Tindal is outside the range of those missiles,” Roggeveen outlines.