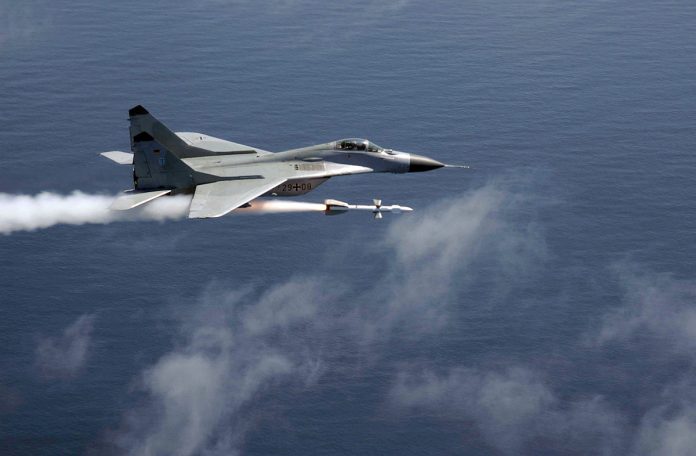 SFTE SpetsTechnoExport and Artem Holding Company, parts of the “Ukroboronprom”, signed an agreement with the Polish company WB Electronics on further development of a bilateral consortium formed in 2016, as well as a new contract for the production of R-27-R1 guided medium-range air-to-air missiles for the Polish Air Force.

The new agreements were arranged during the MSPO 2017 international defense industry exhibition held in Kielce (Poland). The signing of documents expands the capabilities of consortium participants in holding new tenders for the supply of aviation weapons for the Polish Defense Ministry.

Another joint project is multifunctional rocket complex “ZRN-01 Stokrotka Daisy”, intended to destroy enemy fortifications and live forces, as well as UAVs, that was also represented at MSPO-2017.

In 2016, an agreement on joint participation in the development of new defense projects between the SFTE “SpetsTechnoExport,” SJSHC “Artem” and WB Electronics was signed. The rocket system ZRN-01 Stokrotka Daisy became the first jointly implemented project under the agreement. To destroy targets it uses highly effective 80-mm rocket-propelled projectiles, manufactured by SJSHC “Artem”. It takes 1-5 projectiles to destroy an air target at a range of up to 5 km – that’s the most effective cost\damage solution (QPR).

To develop the complex, the project participants organized cooperation of the leading enterprises of their countries. This allowed integrate the most up-to-date developments in the fields of rocket and missile engineering, radar, air defense control and coordination systems and systems for detecting and tracking targets in the optical range.

As reported, the consortium created by SpetsTechnoExport and WB Electronics in 2016 won the tender announced by the Polish Defense Ministry in 2015 for the supply of air missiles for the Polish Air Force.

The State Enterprise “SpetsTechnoExport” is one of the biggest exporting companies, part of the SC “Ukroboronprom”, specializes in foreign economic activities for export and import of modern armament, military equipment and technologies, as well as special purpose products. “SpetsTechnoExport” works closely with Ukrainian enterprises, research centers, design bureaus, public and private companies from over 30 countries across the globe. More information at: http://spetstechnoexport.com/.