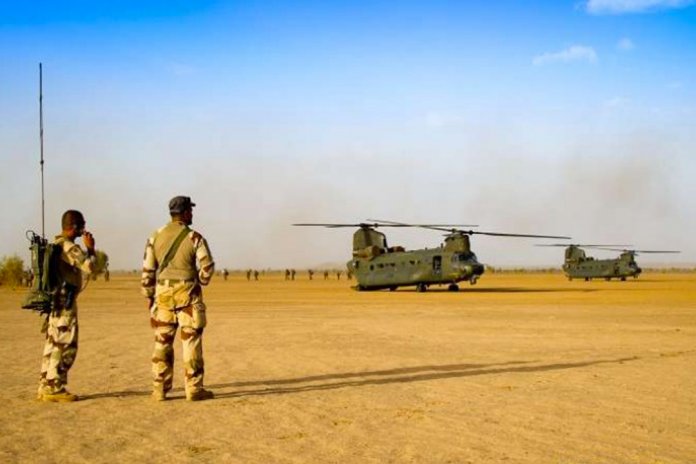 Published in December 2020/January 2021 issue – On 1 August, 2014, France launched Operation Barkhane at the request of the Republic of Mali government as extremist groups pushed south and threatened to overrun the capital, Bamako. The mission was simple, to stabilise the country. Not long after the creation of Barkhane, a terror group known as the Islamic State in the Greater Sahara (ISGS) formed and operated mainly in eastern Mali and neighbouring regions of Niger and Burkina Faso.

Barkhane’s military aircraft are mostly based at airfields in Niamey and N’Djamena. These include French Air Force transport and combat aircraft and French Army (ALAT) Airbus Tiger and Gazelle combat helicopters and Puma and NH90 Caiman transport helicopters. The mission is also supported by three Royal Air Force (RAF) Boeing Chinook HC.5 heavy lift transport helicopters and in 2019, Denmark announced its plan to deploy two Royal Danish Air Force Leonardo EH101 Merlin transport helicopters with up to 70 personnel to the mission. Since reaching full operational capability on 24 December 2019, the unit had completed 120 missions and logged 250 flight hours by the end of March, transporting nearly 1,800 people and 45 tonnes of cargo.

The operational environment in northern Mali is daunting. Temperatures reach well above 40 degrees centigrade, sandstorms reduce visibility to almost nothing and, during the rainy season, many roads become impassable. On 25 November 2019 an ALAT Tiger collided with an AS532 Cougar at low-altitude at night while on a sortie near Ménaka in Northern Mali, killing all soldiers and crew. The loss of 13 was the heaviest loss of life for the French military since 1983.

The RAF detachment in Mali is designated as No 1310 Flight and is deployed in a non-combat role on the UK’s Operation Newcombe and flying from Gao Airfield in Mali. The Flight is fully integrated into the French Groupement Tactique Désert-Aérocombat (GTD-A).

The deployment of RAF Chinooks began in 2018 and it has been Joint Helicopter Command (JHC) that has sustained this operation by providing the personnel, together with the planning needed to ensure the operations continue. The RAF Chinook detachment supporting French and other European troops in Mali has so far logged over 2,000 flight hours, including nearly 340 hours so far this year (2020). Between January and May 2020, the Chinooks lifted 247 tonnes of freight and transported 1,150 passengers.

JHC personnel are also deployed in Mali at Gao Air base, to support No 1310 Flight which is currently from C Flight, No 18 (B) Squadron RAF and their supporting ground crew. One of the JHC units supporting the operation is the Tactical Supply Wing (TSW) which has introduced specialist refuelling activities for all aircraft and helicopters currently based at Gao, including the Danish Merlins and the French Tiger helicopters as well at the RAF Chinooks.

In June 2020 the UK Ministry of defence announced that it would extend military support to Mali by continuing Operation Newcombe with three Chinooks. In November the British Army deployed a 300-strong Long-Range Reconnaissance Task Group to Mali in support of Operation Newcombe in order to provide specialist assistance to the The United Nations Multidimensional Integrated Stabilisation Mission in Mali (MINUSMA).

France has stressed that Barkhane is not an indefinite mission. As soon as possible, it intends to give way to local forces. As often as possible, France wants to partner with national militaries, regional efforts like the G5 Sahel Joint Force and the United Nations.