Unmanned ground vehicles have not yet seen the success experienced by unmanned airborne systems, but is this about to change?

While unmanned air vehicles (UAVs) have been deployed for many years in a variety of roles including reconnaissance, target acquisition and more recently as an offensive weapons platform, unmanned ground vehicles (UGVs) have so far seen more limited use.

For years they have been widely deployed to carry out explosive ordnance disposal (EOD) missions such as those conducted in Northern Ireland where the ‘Wheelbarrow’ remote controlled UGV was used on many occasions to examine abandoned suspect cars and buildings for suspect packages. Its role was later expanded to allow it to place explosive charges in suspect cars and it saved the lives of many EOD specialists. It was operated at a safe distance using a cable and compact control panel.

Small and very compact UGV have proved to be valuable in carrying out house searches in a high threat environment and relaying images to the infantry deployed who are waiting to clear the building.

The latter have been fitted with explosive reactive armour (ERA) for improved survivability and mounted at the front are Pearson Engineering mine clearing ploughs with rear dispensers for marking a cleared path through the minefield.

In 2013 the British Army’s Royal Engineers (RE) started taking delivery of the Rheinmetall BAE Systems Land (RBSL) Terrier CEV which are normally operated by a crew of two but have been fitted for, but not with, a remote control system. This allows the operator not only to remotely drive the Terrier CEV but also operate the front mounted bucket and the side mounted hydraulic arm from up to one kilometre away. This is possible as the platform is also fitted with a suite of cameras for enhanced situational awareness under adverse weather conditions.

During operations in Afghanistan and Iraq, roadside improvised explosive devices (IEDs) caused the loss of large numbers of vehicles and their more valuable occupants.

Large UGV fitted with a variety of front mounted sensors to detect mines and IED were deployed in front of the convoy. Once a device was detected, smaller UAVs would carry out a reconnaissance and try to disable or remove the device.

The US Army Future Combat System (FCS) had a very ambitious programme for UGV which included not only a small man packable units but also wheeled armed robotic vehicles, reconnaissance and target acquisition vehicles, counter mine vehicles and a mule transport vehicle, but in the end the whole FCS was cancelled.

Today UGV are being used for a much wider range of roles including intelligence, surveillance and reconnaissance (ISR) – sometimes armed – and load carrying, especially for dismounted infantry who sometimes have to operate for extended periods in rough terrain.

The UGV can carry ammunition, stores and rations so reducing the infantry’s burden. An increasing number of contractors are now marketing small UGV, some of which are modified commercial chassis (typically 6×6), while others have been developed specifically for military use.

A good example of the former is the Rheinmetall Canada electrically powered Mission Master (8×8) UGV which has been under development since 2016 as a private venture and has already been sold to the UK and others. Its original role was that of supporting dismounted infantry by carrying the rations and ammunition up to a maximum weight of 1,322lb (600kg), but if the amphibious capability is required then the payload is reduced to 660lb (300kg).

Mission Master has been expanded by the installation of a remote weapon station (RWS) fitted with two pods each of which contain seven Thales unguided 70mm rockets which has already been successfully demonstrated. Other armament installations include a Rheinmetall Canada Field ranger RWS armed with a stabilised 20mm dual feed cannon with alternatives being a 12.7mm or a 7.62mm machine gun (MG). The Mission Master can also conduct battlefield surveillance when fitted with sensors including a day/night sensor package with laser rangefinder mounted on a telescopic  mast.

Many countries are investing in UGV but currently most of these are experimental to see how they can be deployed in conjunction with other platforms or on their own. In the UK in 2020, the Defence Science and Technology Laboratory (DSTL) announced the purchase of five totally new autonomous land systems with the aim of delivering vital supplies to the front line “ with improved efficiency and reduced risk to life.”

DSTL placed two contracts worth around $6.7 million to HORIBA MIRA and QinetiQ to supply a number of UGVs and their enabling autonomous systems as part of the UK Ministry of Defence Transformation Fund commitments for the British Army.

According to DSTL: “These contracts are a demonstration of the continued commitment to progressing autonomous systems as innovative approaches for developing future land force logistics capability.

The five UGV delivered comprise three 6×6 Viking which are each capable of carrying up to 1,653lb (750kg) of supplies to front line troops using advanced Artificial Intelligence (AI) autonomy with GPS denied navigation. The other two are the QinetiQ/Milrem Titan UGV which comprises a tracked system based around a modular mission system software architecture. This work aims to reduce the risks specific to the acquisition of the Joint Tactical Autonomous Resupply and Replenishment (JTARR) capability.

Most of the major players in the defence electronics and land systems domain including BAE Systems, Elbit, General Dynamics Land Systems (GDLS), Lockheed Martin, Nexter, Patria and Safran to name but a few. In some cases these contractors have invested in developing the complete system, platform and sensor package, while others have brought in a commercial platform and adopted it for military applications.

At DSEI 2021 in London GDLS UK showed its smaller Multi-Utility Tactical Transport (MUTT) and the much larger TRX which has a payload capacity of up to 4.5 tonnes (4,570kg).

Under contract to the Direction Generale de l’Armement (DGA), the French company of Safran Electronics & Defense is supporting the integration of land robotic demonstrators for the French Armed Forces as part of its Scorpion networked enabled capability (NEC) which brings together a wide range of air and land based systems.

Named Project Furious, it is running for five years and covers the development of three robot demonstrators in different sizes and mission profiles. According to Safran, these demonstrators will be deployed by an infantry platoon and tested in different configurations to get maximum feedback for development.

The largest of the three is the eRider which is being developed by Safran in conjunction with Valeo and PSA, although other small and medium enterprises are also involved.

There are also niche players who have already carved out a slice of the UGV market and one of these is Milrem Robotics of Estonia with its THeMIS UGV which has already been purchased by 11 countries of which seven are NATO members. The THeMIS has been demonstrated with a wide range of weapons, including missiles as well as MG and sensor packages.

Estonia is the leader of the NATO project which hopes to standardised its UGV requirements, with the other countries being Belgium, Finland, France, Germany, Latvia and Spain.

Recently Milrem Robotics demonstrated its intelligent functions (IF) off-road capabilities under a project which aims to develop the European standard IGV. This autonomy demonstration was performed using two THeMIS UGV. The first one followed a human operator walking along a patch with various obstacles, while the operator of the second took control of the first UGV using line-of-sight control and set the second THeMIS to follow the first one from way point A to B. Once this mission was completed the second THeMIS was commanded to return home via the Milrem’s Intelligence Functions Integration Kit (MFOK) mission planner.

While en route, the operator stepped on front of the UGV’s path to trigger its obstacle detection and autostop features, after which it continued with its mission.

China North Industries Corporation (NORINCO) has started to market UGVs on the export market and it is considered probable that these are already deployed by the Peoples Liberation Army.

Sharp Claw 1 is a small lightweight tracked UGV that weighs only 264lb (120kg), is electrically powered and is described by NORINCO as “being designed for anti-terror, anti-riot, patrol and urban battle missions.”  In addition to being fitted with a sensor package it is also armed with a 7.62mm machine gun which is claimed to have an effective range of up to 500m. Maximum speed is being quoted as up to 9km/h (5.5mph) and it can be controlled by radio up to a maximum distance of 800m and much shorter distances by a cable.

The larger NORINCO Sharp Claw 2 is a 6×6 platform also electrically powered but has a range of up to 50km (31 miles) over a four hour period and can be fitted with a sensor pack and a 7.62mm machine gun.

As it is fitted with independent suspension, a high level of cross country mobility is claimed and is has demonstrated being able to climb a vertical obstacle of up to 0.35m and a maximum gradient of 30 percent. In addition to being operated by remote control it also features autonomous path tracking based on a digital map. NORINCO is quoting a maximum combat weight of up to one tonne 1,000kg).

The main drawback of many of these smaller UGV is that they have to be transported to where they are required, often by a trailer towed by a light 4×4 vehicle, and a limited period of deployment owing to battery power.

Smaller countries, such as the Serbia Military Technical Institute (MIT), in conjunction with the local industry, have developed the Milos UGV to meet local operational requirements. This is typically armed with a 7.62mm machine gun with the option of a six round automatic grenade launcher. It also has a new sensor pack for reconnaissance purposes that includes a charge coupled device (CCD) camera, thermal imager and a laser rangefinder. In addition there is an additional forward facing camera for navigation purposes.

In the future, UGV will be complimentary to manned systems for a number of battlefield missions. For example a manned reconnaissance system could control a number of UGV which would operate in advance of the former and feed information in real time. UGV could also be used to supply forward troops to ammunition and rations and potentially also use to evacuate wounded soldier to the rear for urgent treatment. 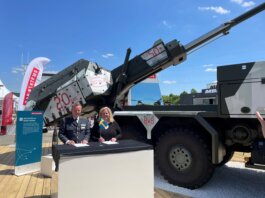