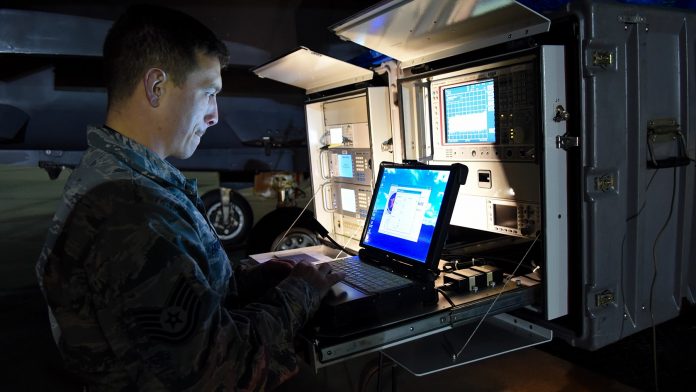 Pentek has release its Quartz Model 5553 SOSA aligned 8-channel A/D and D/A 3U VPX board. A press release announcing the news said the board is “based on the Xilinx Zynq UltraScale RFSoC Gen 3, provides full sub-6 GHz direct-RF I/O support and greater flexibility with more decimation and interpolation options”. It comes complete with a suite of data capture and processing IP (Internet Protocol) modules. In the words of the company, the board is ideal for signals intelligence and Electronic Warfare (EW), along with radar and fifth-generation wireless applications.

Reports from thedefensepost.com in early August revealed that the People’s Republic of China’s (PRC) FH-95 Uninhabited Aerial Vehicle (UAV) had completed a ‘milestone test’ according to PRC state media. The UAV is produced by the Aerospace Times Feihong Technology Company. It has an endurance of 24 hours and carries payloads weighing over 551 pounds (250 kilogram). The FH-95 can perform electronic warfare and reconnaissance missions, including the deployment of anti-radiation missiles.

While on the subject of pods, the US Navy has received its first Raytheon AN/ALQ-249 Next Generation Jammer Mid-Band pod navaltechnology.com reported in August. The first pod was delivered to the navy on 7th July. It now enters a development test programme. Once this is complete, the pod will be subject to an operational test programme. The AN/ALQ-249 will be deployed onboard the US Navy’s Boeing E/A-18G Growler electronic warfare aircraft.

The US Navy’s Naval Air Warfare Centre’s weapons division has awarded Textron a contract worth $48.4 million to assist the testing of US Navy electronic warfare systems. According to a press release, Textron will develop hardware to equip an EW integration test environment. The contract also covers incidental repair and maintenance work for navy EW simulators. The press release said the contract will run until the end of 2026.

The Armée de l’Air et de l’Espace (ADAE/French Air and Space Force) confirmed it retired its two TransportAllianz C-160G Gabriel Signals Intelligence (SIGINT) aircraft in May. Reports state that the aircraft was costing the ADAE $81.6 million annually for a 20 percent availability. As Armada reported in November 2021, the retirement of the C-160Gs was earmarked for 2022. The C-160Gs will be replaced by the Dassault Falcon-8X Archange SIGINT aircraft. Three aircraft were originally earmarked to enter service in 2023. Reports say that this has now been delayed until 2026. To make good this capability shortfall, the ADAE is examining the lease of Saab 340 SIGINT aircraft, although no details were supplied on where these may be sourced from.

The United States has confirmed her supply of Texas Instruments/Raytheon AGM-88 series anti-radiation missiles to Ukrainian forces. Colin Kahl, undersecretary for policy at the US Department of Defence, said recent Ukraine military aid packages had “included a number of anti-radiation missiles that can be fired off Ukrainian aircraft”. Days afterward, the weapon’s use in Ukraine was confirmed by thedrive.com which highlighted social media pictures of AGM-88 wreckage in the Kherson region of southeast Ukraine. No details have emerged on what AGM-88 variant has been supplied to Ukraine. It is most probably the legacy AGM-88B/C version. The Pentagon is unlikely to have supplied the more advanced Northrop Grumman/Raytheon AGM-88E/F/G variants lest this technology inadvertently fall into Russian hands. It was later confirmed by thedrive.com that the missiles had been fired Ukrainian Air Force MiG-29 series combat aircraft. This may represent the first time the AGM-88B/C has been installed on a Soviet/Russian origin airborne platform.

Staying in Ukraine, the barentsobserver.com reported on 16th August Russian allegations that a Royal Air Force (RAF) Boeing RC-135W Airseeker Signals Intelligence (SIGINT) aircraft had violated Russian airspace. The country’s defence ministry claimed the aircraft had done so in the vicinity of Cape Svyatov Nos. This is area is in Russia’s arctic just east of the country’s border with Norway in the Murmansk Oblast. The Kola Peninsula, where Cape Svyatov Nos is situated, is between the Barents and White Seas. These areas regularly host Russian Navy exercises. A navy exercise was thought to be ongoing when the RC-135W made its flight. The Murmansk Oblast is also home to several important Russian naval bases. Whether the aircraft did violate Russian airspace has not been independently confirmed and the RAF has not commented on the allegations.